BLIND LION OF THE CONGO 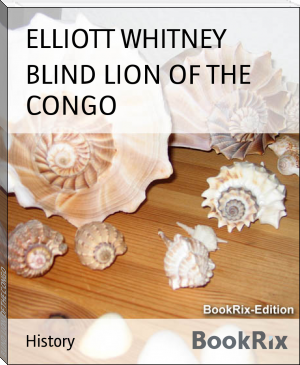 This historic book may have numerous typos and missing text. Purchasers can download a free scanned copy of the original book (without typos) from the publisher. Not indexed. Not illustrated. 1912 edition. Excerpt: ...Life For three days after the departure of Captain Mac there was little hunting done. Silent and morose as he often was, the absent explorer more than made up for this in his moments of gayety. His was a strong personality, moreover, and his absence could not but make itself felt keenly. There was plenty to occupy the boys, however. A number of heads and skins had to be prepared and packed. Then there was the native village to visit, and this was a source of never-ending delight. The chief, whose name was Mvita, gave a great feast in honor of the hunters--to which the hunters donated the greater share of the viands--and the moving-picture outfit came into play with brilliant effect. Mr. Wallace took out the boys on a two-days' trip after animal pictures, also. By utilizing the natives of Mvita's village and also the Bantu porters as beaters, a bloodless hunt was held. In this the animals were surrounded and forced to pass before a white-ant hill on which Burt was posted with the camera. Excellent pictures of various antelope, zebra, an old and toothless lion, and an infuriated rhino were obtained. In this way a week was passed, and finally Mr. Wallace announced that on the morrow they would hold another real elephant hunt, as Mvita reported a herd of the giant beasts three miles to the north. As they were leaving camp at dawn, a number of the villagers hastened up, headed by their chief. With anxious face Mvita implored the honor of bearing the guns of one of the white men. John refused him, wishing to save the usual gifts and emoluments of the office. Burt, however, interrupted with a laugh. "Let him carry our guns, uncle! We've never been waited on by a real king before, an' it's somethin' to boast of. He won't steal 'em, will he?..".