The Art of Needle-work, from the Earliest Ages, 3rd ed.

Including Some Notices of the Ancient Historical Tapestries Von: Elizabeth Stone 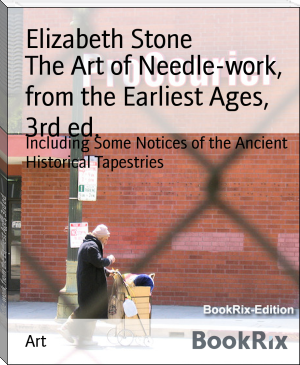 Elizabeth Stone (Georgian: ქეთევან ხურციძე; born as Ketevan Khurtsidze[1]) is an American Paralympic swimmer of Georgian origin.
Elizabeth Stone was adopted on the 4th of July at age 4 from Kutaisi, Georgia. In the last year of high school she used to compete in track & field and also used to run a 25 kilometres (16 mi) race for River Bank Run in Grand Rapids, Michigan. She participated in the 2004 Summer Paralympics in Athens, Greece. At the 2006 World Championships she won a gold medal for 4x100 metre medley and a bronze one for the 100 metres (330 ft) backstroke. In 2008 Paralympics she won a silver medal for another 100 metre backstroke in Beijing, China and on 2010 World Championships she won another gold for 4x100 metre medley which was held at Eindhoven, Netherlands. Couple of years later she received a bronze medal for her participation at 2012 Summer Paralympics in London.