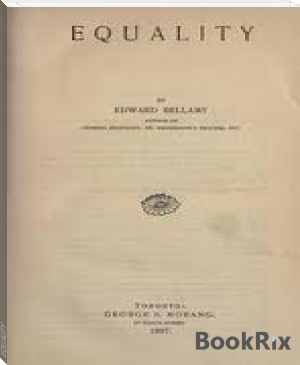 This marvelous book is the sequel to Bellamy's Looking Backward, his utopian novel of several years earlier, where a young man falls asleep in 1887 and wakes in a utopian year 2000, where all social ills are solved. This novel continues the thread of his utopian vision. Equality begins when Julian West returns to the year 2000 to continue his education. The book describes an ideal society in that year. Equality was published just before his death and was not received nearly as well as Looking Backward. Bellamy was born in 1850 in Chicopee Falls, Massachusetts. As a young man he studied law and entered the bar, but never practiced. He was a journalist and social theorist as well as a novelist. Bellamy's theory of public capitalism would greatly affect American political thought in the 20th century.