Hermione and Her Little Group of Serious Thinkers 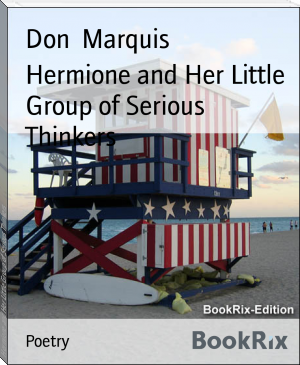 Donald Robert Perry Marquis (/ˈmɑrkwɪs/ mar-kwis; July 29, 1878, in Walnut, Illinois – December 29, 1937, in New York City) was a humorist, journalist, and author. He was variously a novelist, poet, newspaper columnist, and playwright. He is remembered best for creating the characters "Archy" and "Mehitabel", supposed authors of humorous verse. During his lifetime he was equally famous for creating another fictitious character, "the Old Soak," who was the subject of two books, a hit Broadway play (1922–23), a silent movie (1926) and a talkie (1937).