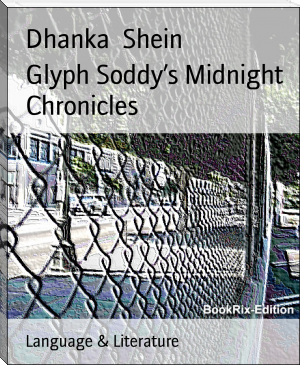 Dhanka Shein's long-awaited follow-up to her debut volume, Atonal Minor, adds to the image of this writer's integrity with its strong sonic qualities and extravagant, but never indulgent, verse architectures in the service of serious intellectual concerns. By turns as machine-gun witted and caustic as one of her dedicatees, Lenny Bruce, then as vulnerable and fluid as the writings of O'Har, Shein also manages the turn from the personal to the civic.

Each of the poems are performances, sometimes metrically baroque and syncopated, sometimes extending from a basal mucosa unit, managing wide variations without straying from a one-or-two word line. Shein runs the poems through enough “attitude” to make even the punctuation marks mercenaries in a march on capital.

Glyph Soddy’s Midnight Chronicles is a digital sullying, putrefying, and deflowering of the white page of Mallarmé, its colors and indentations (though not its text) entirely determined by taming the Herculean vomit of Heteroglossia language to facilitate reading.