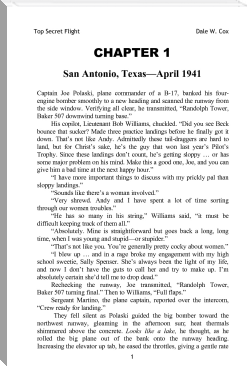 Top Secret Flight tells the story of an actual reconnaissance mission flown in March 1942 to obtain critical photos for planning the DOOLITTLE RAID on Tokyo. An Air Corps Captain on active duty in 1941 was an eyewitness to these events; the mission has never before been revealed to the public.

Three B-17 bombers, extensively modified for photo-recon, flew 18,000 miles in three stages to reach Japan; in 1942 flights this distance had never been attempted. The longest flight up to that time was still Lindberg crossing the Atlantic in 1927.