Where Einstein had failed 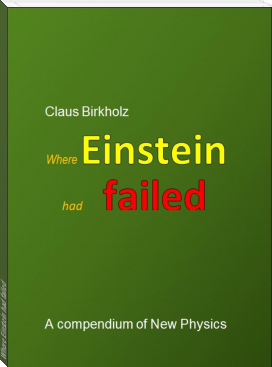 Einstein's revolutionary ideas had been suffering from his rudimentary mathematical knowledge beyond the domain of differential geometry. Thus, he never recognised the invariants of his General Relativity, and he never had been able to formulate his "World Formula".

Hence, his basic equation remained somewhat blurry and fuzzy, touching just one of his invariants; the additional ones fully escaped his notice. His description of physics close to big values of heavy masses went completely wrong: the rotation of stars about the galactic centre of the Milky Way is contradicting his equation. Neither did he succeed in describing a black hole. For compensation, cosmologists invented their concept of "dark matter" later on.

"Dark energy", accidentally, had been made possible by Einstein's "cosmological constant". Nevertheless, he had been unaware that his "constant" is a variable. Its origin and composition remained enigmatic to him and to his followers until to-day.

His conviction of needing "hidden variables", however, proved to be principally correct. Bell's premature rejection of them by his no-go theorems had to be revoked by his "superdeterminism" later on. In the end, they paved the way in order to proceed via Quantum Gravity towards a New Physics solving all those problems culminating in the quantisation of Einstein's curvilinear spacetime and in the non-valence structure of matter. The 4 dimensions of space and time, the quark confinement, and the (correct) numerical value of the fine-structure constant are results of theory.

These works on Quantum Gravity are exclusive. Due to lacking solution ideas of how to approach the problem at all, nobody really is working on it. The author cracked that tough nut successfully.