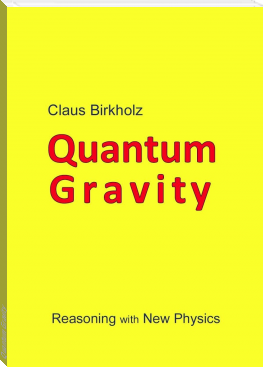 The reproducibility of facts is the hallmark of a natural science, the impossibility of counting up to infinity that of a measuring process, and the "law of great numbers" that of statistics. A statement like "Nothing will come from nothing, and nothing gets lost" will yield conservation laws. Bell's own interpretation of his no-go theorems, then, will directly give Quantum Gravity, and its iteration the unification of all types of forces of nature ("New Physics").

The present paper will outline the reasoning of Quantum Gravity and of New Physics rather than their technical details - as far as all that allows for separating those issues from each other.

Thermodynamic principles are imposing 2 alternative channels to us: A closed system will yield the reaction channel conserving probabilty, and an open system the dynamic channel. Causality will mark the open channel, entanglement the reaction channel. Parities are the key to understanding a black hole free of singularities.

Space, time, and mass can be counted from the non-valence parts of a particle as occurrence rates of special double-quant properties; Higgs is dispensable. The spectrum of stable particles derives from the representation of our static multiverse. Its building universes give us the illusion of motion (like by a flip book).

Lagrange's formalism and its canonical quantization prove as classical dead locks of obsolete centuries. The multitude of positive results - like the fine-structure constant calculated correctly, e.g. - speak in favour of New Physics, the total absence of "broken" quantum numbers in favour of a deeper "understanding" of nature.