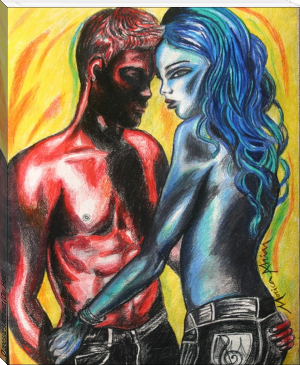 When seventeen year old Ashley is partnered with eighteen year old Zane in Drawing class, she is horrified. Ashley barely wants to be in the same class with him, let alone be his partner in a big project that could make or brake her future as an artist. Zane? He's rude, sarcastic, disrespectful, loud, full of himself, and most of all a slacker! He's just going to bring her down...or is he?

The more Ashley spends time with Zane, she realizes why Zane's the way he is, and they soon become friends...but he's still keeping something from her...a deadly secret that will break Ashley's heart, and stop his own.

why is it on hold? I need more. And also about that repeated chapter.

This book was phenomenal! I loved every word of it, but is it finished? You had a comma and I don't know whether or not it was the end of the book. If it isn't finished, will you update?

Is this unfinished? The last sentence of the info makes it sound like he will die of cancer or something traumatic to their relationship

I loved this and kinda feel like there should have been more. Give the reader the assurance in the end of her having some confidence and show that zane appreciated her and wasnt judging of her. Im not saying graphic sex scene. In the scene it could just be emotional details. I loved this story just think a few more sentences wouldve been satisfying instead of her being so nervous at the end