The Works of Charles Lamb in Four Volumes, Volume 4 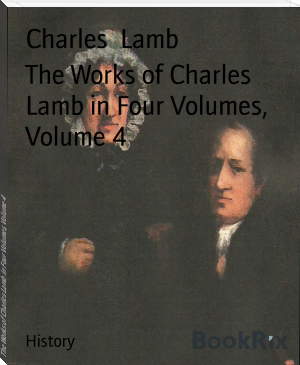 It was noontide. The sun was very hot. An old gentlewoman sat
spinning in a little arbor at the door of her cottage. She was blind;
and her granddaughter was reading the Bible to her. The old lady had
just left her work, to attend to the story of Ruth.

"Orpah kissed her mother-in-law; but Ruth clave unto her." It was a
passage she could not let pass without a _comment_. The moral she
drew from it was not very _new_, to be sure. The girl had heard it a
hundred times before--and a hundred times more she could have heard
it, without suspecting it to be tedious. Rosamund loved her
grandmother.

The old lady loved Rosamund too; and she had reason for so doing.
Rosamund was to her at once a child and a servant. She had only _her_
left in the world. They two lived together.

They had once known better days. The story of Rosamund's parents,
their failure, their folly, and distresses, may be told another time.
Our tale hath grief enough in it.

It was now about a year and a half since old Margaret Gray had sold
off all her effects, to pay the debts of Rosamund's father--just
after the mother had died of a broken heart; for her husband had fled
his country to hide his shame in a foreign land. At that period the
old lady retired to a small cottage in the village of Widford in
Hertfordshire.

Rosamund, in her thirteenth year, was left destitute, without fortune
or friends: she went with her grandmother. In all this time she had
served her faithfully and lovingly.

Old Margaret Gray, when she first came into these parts, had eyes,
and could see. The neighbors said, they had been dimmed by weeping:
be that as it may, she was latterly grown quite blind. "God is very
good to us, child; I can _feel_ you yet." This she would sometimes
say; and we need not wonder to hear, that Rosamund clave unto her
grandmother.

Margaret retained a spirit unbroken by calamity. There was a
principle _within_, which it seemed as if no outward circumstances
could reach. It was a _religious_ principle, and she had taught it to
Rosamund; for the girl had mostly resided with her grandmother from
her earliest years. Indeed she had taught her all that she knew
herself; and the old lady's knowledge did not extend a vast way.

Margaret had drawn her maxims from observation; and a pretty long
experience in life had contributed to make her, at times, a little
_positive:_ but Rosamund never argued with her grandmother.

Their library consisted chiefly in a large family Bible, with notes
and expositions by various learned expositors, from Bishop Jewell
downwards.

This might never be suffered to lie about like other books, but was
kept constantly wrapt up in a handsome case of green velvet, with
gold tassels--the only relic of departed grandeur they had brought
with them to the cottage--everything else of value had been sold off
for the purpose above mentioned.

This Bible Rosamund, when a child, had never dared to open without
permission; and even yet, from habit, continued the custom. Marg