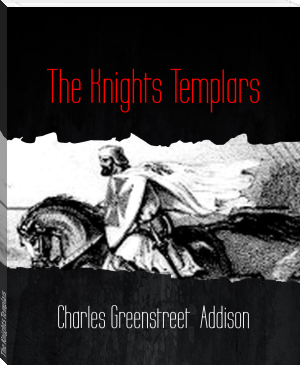 Having some years ago, during a pilgrimage to the Holy City of Jerusalem, gained admission to the courts of the ancient Temple of the Knights Templars, which still exists on Mount Moriah in a perfect state of preservation as a Mussulman Mosque, and having visited many of the ruined fortresses and castles of the ancient order of the Temple, whose shattered walls are still to be seen at intervals in Palestine and in Syria, from Gaza to Antioch, and from the mountains of the Dead Sea to the shores of the Mediterranean, I naturally became greatly interested in the history of the order, and in the numerous remains and memorials of the Knights Templars still to be met with in various stages of decay and ruin in almost every part of Europe. The recent restoration of the Temple Church at London, the most beautiful and the best preserved of all the ancient ecclesiastical edifices of the western provinces of the Temple, first suggested to me the idea of writing a short historical account of the varied fortunes of that great religious and military fraternity of knights and monks by whom it was erected, and of their dark and terrible end.