THEISM OR ATHEISM THE GREAT ALTERNATIVE 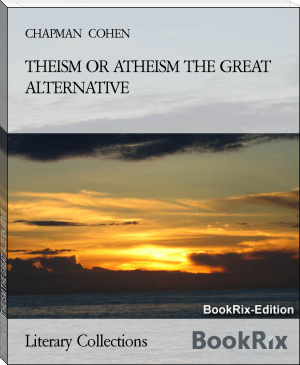 Chapman Cohen (1 September 1868 – 4 February 1954) was a leading English atheist and secularist writer and lecturer.Chapman Cohen was the elder son of Enoch Cohen, a Jewish confectioner, and his wife, Deborah (née Barnett). He attended a local elementary school but was otherwise self-educated.[1] He had read Spinoza, Locke, Hume, Berkeley, and Plato by the time he was eighteen.[2]