An Historical Narrative Originally Composed in Greek During the Reigns of Septimius Severus, Von: Cassius Dio 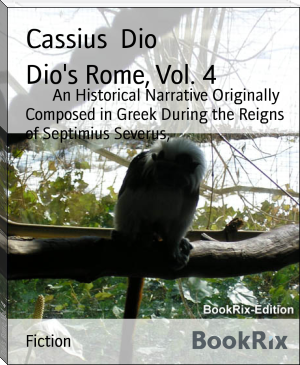 Lucius (or Claudius) Cassius Dio (/ˈkæʃəs ˈdiːoʊ/; alleged to have the cognomen Cocceianus;[1][2] Greek: Δίων Κάσσιος Κοκκηϊανός Dion Kassios Kokkeianos, c. AD 155–235),[3][4] known in English as Cassius Dio, Dio Cassius, or Dio, was of Greek origin, Roman consul and noted historian who wrote in Greek. Dio published a history of Rome in 80 volumes, beginning with the legendary arrival of Aeneas in Italy; the volumes then documented the subsequent founding of Rome (753 BC), the formation of the Republic (509 BC), and the creation of the Empire (31 BC), up until AD 229. The entire period covered by Dio's work is approximately 1,400 years. Of the 80 books, written over 22 years, many survive into the modern age, intact, or as fragments, providing modern scholars with a detailed perspective on Roman history.