How to Save a World From Dying: A Demon Apocalypse Love Story 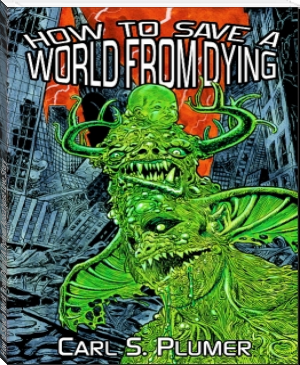 Frightening Look At The Future That's Both Funny And Romantic!
Plenty of Chills & Thrills for Both Horror AND Romance Fans!
☠
After a night out at their favorite Manhattan club, Mallory Alexandria is kidnapped right in front of her soul mate, Zachary Zemeritus. Zachary calls the law and the nearest cop bot, Chief Inspector Anthony Borgnine, buzzes to the scene.
☠
❝Zach hung up and gazed at the police bot, its blue-metallic casing shining in the early dawn, as it descended with deliberation to hover at about Zach's eye height. 'Well now, citizen,' the bot squawked. 'It would appear we have work to do!'❞
☠
The year is 2035 and Earth is under attack by giant demons from outer space!
Demons as tall as houses with multiple heads, arms, and legs.
☠
❝The eyes on the first of its three heads had a serpent's split pupils, puke green. The eyes on the second head (which grew not beside the first head, but on top of it the way a cyst would) were as red as a poison frog's. The third head was stacked on top of its brothers, but this head was not worth talking about. It was a baby's head--and it was dead.❞
☠
As they search for Mallory, Zach and Borgnine are attacked by one of these demons and Zachary winds up in the hospital. With most of his bones broken and his insides crushed, Zach slips into a coma, close to death.
☠
Expert scientists and surgeons from around the globe arrive to operate on Zachary, turning him into something more machine than man. He can fly, deflect bullets, and is all but indestructible. However, his memory is gone -- he doesn't know who he is or why he's now metallic.
☠
Despite his ability to launch bombs and bullets from his armor, the demons capture him.The beasts beat him until his nano-circuits begin to shut down and his carbon-fiber suit begins to fail. First the original beat-down and coma. And now this!
☠
New York City is being destroyed!They've paved Central Park and turned it into a military base!
☠Zachary and Mallory's friends have been captured!
Will Mallory and Zachary be reunited?
Can Zachary conquer the demons from out of space?
Can the world be saved from dying?