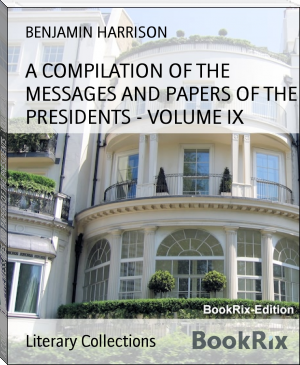 Benjamin Harrison (August 20, 1833 – March 13, 1901) was the 23rd President of the United States (1889–1893); he was the grandson of the ninth President, William Henry Harrison. Harrison had become a prominent local attorney, Presbyterian church leader and politician in Indianapolis, Indiana. During the American Civil War, he served the Union for most of the war as a colonel and on February 14, 1865 was confirmed by the U.S. Senate as a brevet brigadier general of volunteers to rank from January 23, 1865. Afterwards, he unsuccessfully ran for the governorship of Indiana but was later elected to the U.S. Senate by the Indiana legislature.

Harrison, a Republican, was elected to the presidency in 1888, defeating the Democratic incumbent Grover Cleveland. Hallmarks of his administration included unprecedented economic legislation, including the McKinley Tariff, which imposed historic protective trade rates, and the Sherman Antitrust Act; Harrison facilitated the creation of the National Forests through an amendment to the Land Revision Act of 1891. He also substantially strengthened and modernized the Navy, and conducted an active foreign policy. He proposed, in vain, federal education funding as well as voting rights enforcement for African Americans during his administration.

That lucky bastard lived what most comic book fans only dream of. Stan Lee is probably kicking himself. lol