The Angaran Chronicles: The General and the Poet 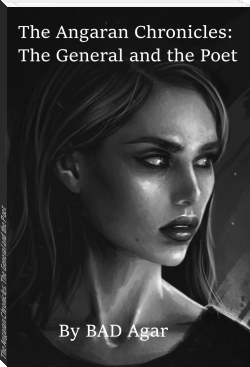 On many occasions, Raleas had caught her mother crying, curled up on her bed or in a corner somewhere in the mansion. Sometimes after one of their countless fights, but mostly during the long, long months of her father's absence. Every time Raleas hadn't hesitated to rip into her mother. Tell her how pathetic and weak she was.

As Raleas lay on her bed her face buried her pillows. A turning, horrific feeling, twisted in her stomach. Raleas hated it, didn't know what it was, but it hurt more than the anger, the sadness.

She had no idea how long she laid like that, but Raleas knew that every second she wished her father would knock on her door, or even kick it open and yell at her. Anything. But nothing. Just silence.

The silence seemed always to accompany her father. Raleas was used to it. But this silence was different; it felt like powerful, tight hands held her down, with a ten-ton weight behind them.

Still, she didn't cry; despite her body seeming to scream for her to through the pulsing pain in her chest and the swelling and swirling behind her eyelids.

It felt like forever before sleep overtook her and a split second before she dropped into the complete dark when she realised the feeling was in her guts.

Raleas didn't dream, though she thought she would. But the black constantly twisted with greens and purples that shone and edged with gold and silver. Like petrol moving in water.

When Raleas awoke, she found her face buried in a wet pillow.

She sighed and rolled onto her back and gazed at the brown and beige ceiling.

Then she rolled on her side and looked at the clock on her bedside table, and when she saw the time, it caused a shudder of shocking cold coursed into her and she sat up and leapt off her bed and barged out her door.

'Dad. Dad,' she said, running down the corridor.

He slipped out of the doorway leading into the kitchen. He wore his formal uniform. An immaculately pressed, brilliantly blue formal two-piece suit. His peaked cap tucked in the crook of his arm. His gaze was made of narrow slits as he looked down at her.

'What are you doing?' he said. 'I did not give you permission to leave your room.'

'But it's only an hour until the funeral.'

'You are staying here.'

It took Raleas a few seconds to process his sentence and when she did a sharp sting shot through her chest.

'What?' she said as tears erupted into her eyes, taking over her vision. She could no longer stop them from falling down her face. 'W-why?'

'You know why,' he said. 'And stop the waterworks, you look pathetic. Go back to your room. You will not leave this house until I return.'

Then he turned to leave.

'Please,' she screamed at his broad back. 'Please don't do this to me!'

He paused, but only for a second before he walked on.

'Dad. Dad,' she said, she wanted to follow him, to grab his tunic, turn him and scream in his face. She wanted to tell him how much of a monster he was. The horrific injustice. The vast disproportion of his retribution.

Raleas tried to shout those words, but they emerged from her lips as squeaks and crackles as she hit her back against the wall and slid into a foetal ball.

She didn't even know if her sobbing was real or not.

She didn't even blink when he slammed the front door shut.