Lectures On Dramatic Art And Literature 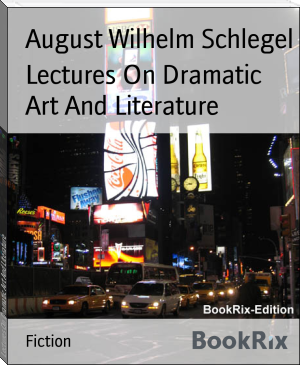 Schlegel was born in Hanover, where his father, Johann Adolf Schlegel, was a Lutheran pastor. He was educated at the Hanover gymnasium and at the University of Göttingen.[2] At the University of Göttingen, he received a thorough philological training under Heyne and became an admirer and friend of Bürger, with whom he was engaged in an ardent study of Dante, Petrarch and Shakespeare. From 1791 to 1795, Schlegel was tutor in a Dutch banker's family at Amsterdam.[3]

In 1796, soon after his return to Germany, Schlegel settled in Jena, following an invitation of Schiller.[3] That year he married Karoline, the widow of the physician Böhmer.[2] She assisted Schlegel in some of his literary productions, and the publication of her correspondence in 1871 established for her a posthumous reputation as a German letter writer. She separated from Schlegel in 1801 and became the wife of the philosopher Schelling soon after.[3]