THE AFFAIR OF THE "AVALANCHE BICYCLE & TYRE CO., LTD." 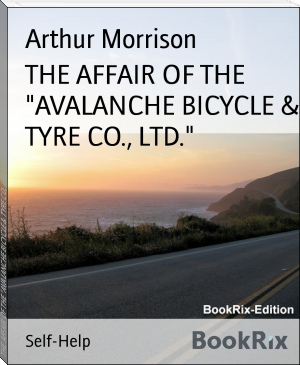 Arthur George Morrison (1 November 1863 – 4 December 1945) was an English writer and journalist known for his realistic novels and stories about working-class life in London's East End, and for his detective stories, featuring the detective Martin Hewitt. He also collected Japanese art and published several works on the subject. He left a large collection of paintings and other works of art to the British Museum after his death in 1945. Morrison's best known work of fiction is his novel A Child of the Jago (1896).
Morrison was born in Poplar, in the East End of London, on 1 November 1863. His father George was an engine fitter at the London Docks. George died in 1871 of tuberculosis, leaving his wife Jane with three children including Arthur. Arthur spent his youth in the East End. In 1879 he began working as an office boy in the Architect's Department of the London School Board. He later remembered frequenting used bookstores in Whitechapel Road around this time. In 1880 Arthur's mother took over a shop in Grundy Street. Morrison published his first work, a humorous poem, in the magazine Cycling in 1880, and took up cycling and boxing. He continued to publish works in various cycling journals.