How And Why To Overcome The Monster As A Christian Von: Archibong EmmanuelEtim 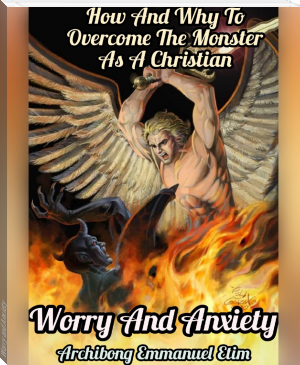 Worry and Anxiety; one of the greatest distorting substances in the world today, distorting the joy and happiness of people living in the world on daily basis with its stingy influences. So great is its influences in the life of the people that like a real monster which put the human to flight at either its presence or at the moment of the mentioning of its name, so also has its existence become in the life of the people. In fact, so great is its worth in the life of the people living in our world today that it seems like it is becoming one of the idolize things to them, that is defining their mood at every moment of the time, like their eating moment and their refraining moment from eating, their moment being happy and going out to caught fun with pals, and their moment of being solitary from all etc. In fact, so great has its influences become in the life of the people in our world today that even some people has really idolize in their life. Yes, this is very true. I once met a pal and also a PhD holder lecturer who once told me that one of the ways by which one can take to obtain success in this life is through the one learning to live a life of worrying and being anxious of life's process on daily basis.

In fact, like an unsurmountable and unconquerable real monster to the human so also has this substance of things called worry and anxiety being in our world. For despite the great measure layout by many scholars around the world on how to eradicate its existence in the life of the people, all seems to be to no avail. From our environment to off our environment (the social media world) what we see and hear is of the hurtful effects this monster is creating in the life of the people on daily basis (many people in our world today live in depression, dejection, despondency of life, and some have committed suicide all because of them being worried and anxious of one thing or the other etc.)

Howbeit, with an undisputability of its might over the humans because of the harbour its existence has created in their life, this monster of the world ought not to have an influence over the Christians. This is because Jesus Christ their mighty leader has proclaimed himself having preeminence over all things, both of physical and those of the spiritual through his resurrection from the death, and then sitting on a throne raised beyond every existing thrones under the heaven. Also, he has promised and also proclaimed giving this victory of his to all who believe on him (John1:12, Luke 10:19). But it is bizarre that despite this great Promises made by the Lord to his believers we still find that this monster of the world is still having preeminence over the believers as though they do not have a saviour to save them from it, there by making them to be of no differences between the people of the world and they who are called the children of God, for as the former so also is the latter (both control by this great monster who defines their mood of living life on daily basis). And this is making the word of the Lord to seem falsehood to his believers like he is just seeking to get followers from them. Howbeit, from his holy book (the Bible) it is affirmed that every word of his is true and there is no lie attached to it (Proverbs30:5), there by expressing that the proclamation of his to his believers of giving them victory over all things because they do believe on him isn't a falsehood statement to them for him to just get followers from them.

The question then rises, why then does this monster of the world also having preeminence over the believers life if the Promises of the Lord to them isn't a falsehood proclamation, and how can it be overcome in their life?

This is what this book is all about, to educate the Christians on how and why they should overcome the monster of the world called worry and anxiety in their life as they continue believing in the Lord. It is a one book I encourage every believer to get if they desire to enjoy their walk with the Lord.