The Dharma Videos of Lust 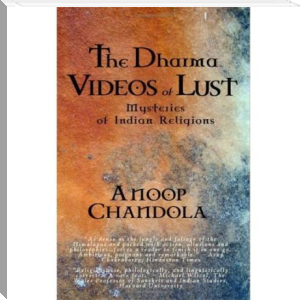 “The Dharma Videos of Lust” was first published to acclaim in 2005, and is now re-issued by UKA Press in a fully revised, unexpurgated edition. Based on Professor Chandola’s own life, the novel tells the story of Mohan Chaube, who leads a double life – as a Brahmin priest, and as a radical university professor. Professor Chaube sits down one day to watch a few racy videos sent to him in secret, and suddenly comes face to face with his own assumptions. In the often hilarious, sometimes tragic, personal stories in this book, he weaves through Hindu mysteries, myths, rituals, rites, and festivals which wallow in sex and violence, and exposes the dark side of a religion followed by over a billion people.

”The Hindu priest: the scholarly and human experience of such an individual has never been recorded in literature.” - Charles S.J. White, Professor Emeritus and Chair, Department of Philosophy and Religion, American University
‘The Dharma Videos of Lust’: “Religion-wise, philologically, and linguistically correct” and “A rare feat.” - Michael Witzel, The Wales Professor of Sanskrit and Indian Studies,
Harvard University

“Fascinating, satirical and erudite, Chandola’s novel touches on Hinduism, Sikhism, yoga, rationalism, religion, a woman’s right to choose… Each story a thread added to a shining whole of pleasure, betrayal, lust and pain. Generous, humorous and full of linguistic pleasures, Chandola brilliantly melds the myths of ancient religions with the mysteries of modern life, immersing us in an entirely new and hypnotic world.” - Ellen Tanner Marsh, Best Selling Author, New York Times
”While the author illustrates how rituals serve as the glue of human relationships and social values, he also narrates messy collisions of religious tradition with contemporary lifestyles … From Vedic cosmology to classical aesthetic theory… a fine reading in an introductory course on Indian Religions.” - David Swain, PhD, South Asian Languages and Civilizations, University of Chicago

Anoop Chandola is available for all media interviews. chandola@email.arizona.edu

There is nothing to read....disappointing

it doesn't have anything written in this book!!