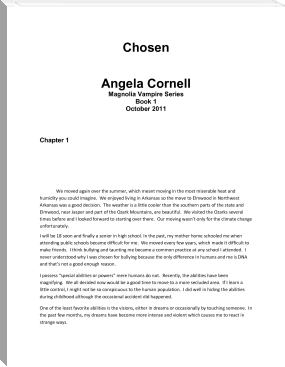 Madelene Victoria Irvine, MADDIE, is a 17-year-old not completely human Arkansas girl. Raised and hidden amongst humans , she has had to hide her psychic powers her entire life. As she ages, her powers multiply so another move is inevitable.

Maddie quickly makes friends in her new town, an unusual event for her. She finds herself not only among humans but also among other unnatural races. After seeing her dream vampire exists, a friendship and romance begin to blossom. Maddie is befriended by vampires, shape shifters, witches and fairies in her new hometown.

Maddie discovers parts of her biological makeup have been hidden from her. She only knew of the vampire, elvin and human blood but quickly learns the missing link is her fairy blood. An accidental meeting with a Fairy reveals Maddie may be the chosen one of a lore written thousands of years ago.

Rumors spread about a forming vampire army, world wide, desiring control of all races. As Maddie and her new friends begin protection training in the magical sanctuary near her house, new powers appear, attacks begin and relationships deepen.

There are no dull moments for the people of Elmwood, Arkansas.