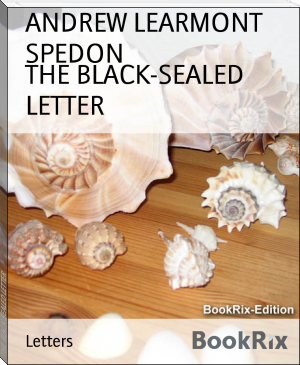 THE BLACK-SEALED LETTER;
Or, The Misfortunes of a Canadian Cockney.
by
ANDREW LEARMONT SPEDON,
Author of "Canadian Summer Evening Tales," "The Canadian Minstrel," &c.

Printed for the Author, by Mitchell & Wilson, Montreal. 1872.

How slight a cause may change our life Beyond its own control, Produce a cordial to the heart, Or canker in the soul.

The Black-Sealed Letter;
OR,
THE MISFORTUNES OF A CANADIAN COCKNEY.
Old London!--city of cities!--whose foundations were laid when the ancient Briton in his martial glory prowled among the dense forests whose foliage darkened the waters of the Thames, long ere the foot of the adventurous Roman had touched the shores of Albion; or the Dane and Saxon had established themselves within the strongholds of the British isles. Who has not heard of this great old city, teeming with human life, and filled with the extremes of wealth, poverty, righteousness and iniquity? Who has not heard of its eminent statesmen and its distinguished authors:--its time-honored institutions of religion, literature and jurisprudence: its antiquated buildings, themselves volumes of history written the eventful finger of time:--its massive warehouses; and also its magnificent mansions, wherein peers and princes banquet in luxury:--its club-houses; and its dens of pollution, amid whose shadows the grim spectres of degraded humanity struggle out a wretched existence. Into this great city--wonderful and complicated in itself--the modern Babylon of the world,--gentle reader, now follow me in imagination, and I will introduce you to the subject of the following story.