Gigi and The Heir of Hell 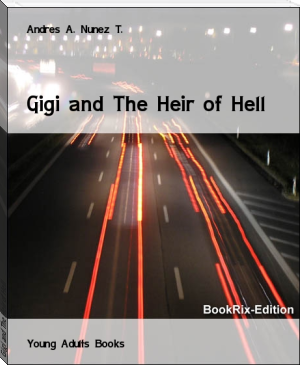 It was a long time ago. No one besides your great-great-great grandparents would remember. But, some people do remember. The story starts where Gigi, a successful lady meets the love of her life.
Gigi Calsirberg was walking down a street in a small town in Connecticut. No one really remembers the name but it was sure someone would not forget this story. Okay, Gigi was walking down the street to a parking lot, where se was going to a commune. It as the 70s, and she was a hippie, in protest next fall. There was a red VW Kombi with tie-dyed doors, weird huh? She got there in fifteen minutes. She was suppose to wait for her boyfriend Jake Love (He had changed his last name from Lovepeck to just ‘Love’) to go to the commune.
“Where can he be?” she said a little loopy. “Am I high?” she said chuckling.
She took a little tiny mirror from her pocket. She examined her eyes. They were red, like if she had been wearing contact lenses.
“Yes, I am,” she said then, putting out a cigarette.
She took the kombi’s keys out of her pocket and put it in to open the door. She went to the driver’s seat to listen to the radio. Peace music, of course.
“This is so….Wow! Look at that man”!” she looked at the mirror and saw a pale man coming towards the kombi. That wasn’t her African American boyfriend. I know. Black and white can mix.
Anyways, that wasn’t him. No, it was not.
“Hey, man!” said Gigi, still loopy.
“Hey, wanna go for a ride?” he asked. He wore old fashion clothes, but not hippie for sure.
She did not know what to do. Should she wait for Jake? Or should she just go with this handsome guy? She thought about it about five seconds, and then said “Sure man, hop on”
The guy went to the other side in no time. Gigi was high, so but she did not know what to say or believe.
“That was fast man, what’s your friggin’ name?”
“John, what’s yours pretty flower?” he said, his voice soft and smooth.
Gigi could not help her pathetic giggling
“Gigi, but most people call me Gi. Do you wanna call me that?” she said
She was already flirting with this guy? He could be a drug dealer if you ask me! But hey, if she was already falling for this man’s fake façade, she would be making out with him in no time.
“Yes, love to do that!” he said “But, ain’t we suppose to go on a ride, Gi?” He said ‘Gi’ in a weird way so she could notice how he said it.
“Sure, man.” She ended u saying.
She started the kombi and then sped off towards nowhere especially. She just wanted to be with this weird man.
“So, where you from?” he said
“Ima New Yorker” said Gigi
“You aint got that weird-ass accent” said John.
“I know. I wasn’t raised n the ‘hood. I was raised in Jacksonville” she said
“Oh, ‘kay” he said, looking pale. Well paler.
“Where you from, man?” asked Gigi
“I’m from Cincinnati” he said
“Oh” said Gigi
“So, like, where you wanna go?” he asked Gigi.
“Don’t know. Where you wanna go?”
“Ma house.”
“I can take you there” said Gigi
“Thanks, man” said John
“Where is the crap? If you don’t tell me I will neva be able to know, you know”
“Just go to San Diego!” he said
“What? San Diego?! Hey, listen man, we are in L.A and I don’t have enough organic gas” Gigi said
“Please, take me there” he said. That was all it took to take he into control.
“Okay”
They drove to San Diego without a word. Gigi drove, but she was high, and she ran over two boys and an old lady whose last words where “What the f---, you f------ you HIPPIE!”
It was as if Gigi was controlled by some unknown thing and no one knew about it.
“Turn left” said John
“Okay” said Gigi not even blinking
She turned. Then she saw it clearly: The wall, the hobo, and her whole life going trough her eyes.
She was protesting…
She was getting high…
She met Jake….
She was making out in a tree….
She left Jake….
She was walking down a street….
She saw a white man…
She went on a road trip with the man…..
She was going to crash with the wall…
“John! Help me!” she turned to the shotgun seat, but John wasn’t there, and instead, a letter written in blood said: NEVER TRUST THE HEIR OF HELL
It was too late now. She ran over the hobo and then crushed against the alley wall. Blood everywhere. No way did she survive.

As her spirit flouted away, she saw other four spirits, almost reaching the sky by now. A little boy and a big boy. An old lady looking down at the family who would miss her. And, a homeless man who was innocent.
When her spirit touché the sky, it bounced downward and started descending,.
She saw the bad people. Adolf Hitler. Judas Iscariot and many many more.

Her spirit cried out in pain when she burned in the fiery pit.


The Heir of hell is a ghost of a man who became a demon, who doesn’t belong in either heaven or hell. He seduces people into a violent death, where they cannot rest in peace.
Never trust appearance, trust the heart

I was feeling in A HIppIe mood that day