History Of Free Thought In reference To The Christian Religion 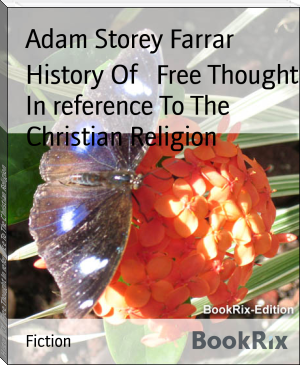 Born in London on 20 April 1820, was son of Abraham Eccles Farrar, president of the Wesleyan conference, by his second wife, Elizabeth, daughter of Adam Storey of Leeds. Educated at the Liverpool Institute, he matriculated in 1844 at St. Mary Hall, Oxford, obtaining a first class in the final classical school and a second in mathematics, and graduating B.A. in 1850. In 1851 he was the first winner of the prize founded in memory of Thomas Arnold, with an essay on The Causes of the Greatness and Decay of the Town of Carthage, and in the following year proceeded M.A. and was elected Michel fellow of The Queen's College. In two successive years, 1853 and 1854, he won the Denyer prize for a theological essay, on The Doctrine of the Trinity, and Original Sin.[1]