The Wearing Of The Green 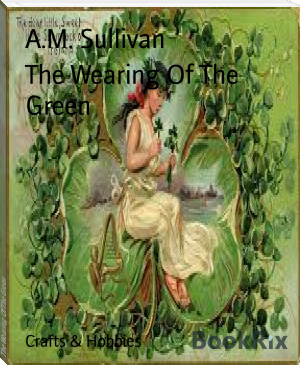 The news of the Manchester executions on the morning of Saturday, 23rd
November, 1867, fell upon Ireland with sudden and dismal disillusion.

In time to come, when the generation now living shall have passed away,
men will probably find it difficult to fully realize or understand the
state of stupor and amazement which ensued in this country on the first
tidings of that event; seeing, as it may be said, that the victims had
lain for weeks under sentence of death, to be executed on this date. Yet
surprise indubitably was the first and most overpowering emotion; for,
in truth, no one up to that hour had really credited that England would
take the lives of those three men on a verdict already publicly admitted
and proclaimed to have been a blunder. Now, however, came the news that
all was over--that the deed was done--and soon there was seen such an
upheaving of national emotion as had not been witnessed in Ireland for a
century. The public conscience, utterly shocked, revolted against the
dreadful act perpetrated in the outraged name of justice. A great billow
of grief rose and surged from end to end of the land. Political
distinctions disappeared or were forgotten. The Manchester Victims--the
Manchester Martyrs, they were already called--belonged to the Fenian
organization; a conspiracy which the wisest and truest patriots of
Ireland had condemned and resisted; yet men who had been prominent in
withstanding, on national grounds, that hopeless and disastrous
scheme--priests and laymen--were now amongst the foremost and the
boldest in denouncing at every peril the savage act of vengeance
perpetrated at Manchester. The Catholic clergy were the first to give
articulate expression to the national emotion. The executions took place
on Saturday; before night the telegraph had spread the news through the
island; and on the next morning, being Sunday, from a thousand altars
the sad event was announced to the assembled worshippers, and prayers
were publicly offered for the souls of the victims. When the news was
announced, a moan of sorrowful surprise burst from the congregation,
followed by the wailing and sobbing of women; and when the priest, his
own voice broken with emotion, asked all to join with him in praying the
Merciful God to grant those young victims a place beside His throne, the
assemblage with one voice responded, praying and weeping aloud!

The manner in which the national feeling was demonstrated on this
occasion was one peculiarly characteristic of a nation in which the
sentiments of religion and patriotism are so closely blended. No stormy
"indignation meetings" were held; no tumult, no violence, no cries for
vengeance arose. In all probability--nay, to a certainty--all this would
have happened, and these ebullitions of popular passion would have been
heard, had the victims not passed into eternity.