A History Of Rome Volume 1

During the Late Republic And Early Principate Von: A H.J. Greenidge 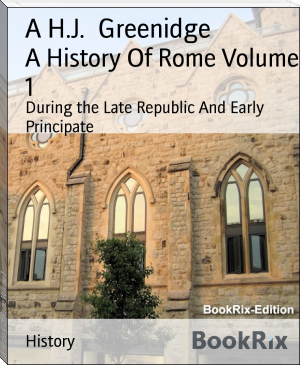 Abel Hendy Jones Greenidge (1865 – 1906) was a writer on ancient history and law.bel Hendy Jones was educated at Harrison College, Barbados, winning in 1884 the Barbados Scholarship (first established when Abel and his brother Samuel were at school, providing £175 per annum for four consecutive years) and in the same year (15 October) matriculating at Balliol College, Oxford. Elected to an exhibition the following year, he was placed in the first class, both in Classical Moderations in 1886 and in the final classical school in 1888. He graduated BA in the same year and proceeded MA in 1891 and D. Litt in 1904. On 5 Dec 1889 he was elected, after examination, fellow of Hertford College. There he became a lecturer in 1892 and tutor in 1902 and he retained these offices until his death in 1906. He was also lecturer in ancient history at Brasenose College from 1892 to 1905. He vacated his fellowship at Hertford on his marriage in 1895 and on 29 June 1905 was elected to an official fellowship at St John’s College. He examined in the final classical school in 1895-6-7-8.