A History Of rome, Vol 1 Fiscle (Part-I) During the Late Republic And Early Principate 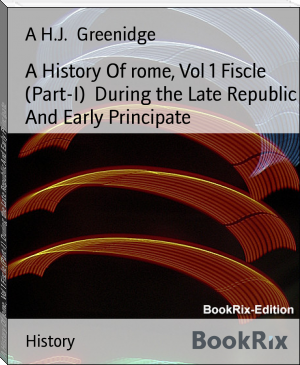 This work will be comprised in six volumes. According to the plan which
I have provisionally laid down, the second volume will cover the period
from 104 to 70 B.C., ending with the first consulship of Pompeius and
Crassus; the third, the period from 70 to 44 B.C., closing with the
death of Caesar; the fourth volume will probably be occupied by the
Third Civil War and the rule of Augustus, while the fifth and sixth will
cover the reigns of the Emperors to the accession of Vespasian.

The original sources, on which the greater part of the contents of the
present volume is based, have been collected during the last few years
by Miss Clay and myself, and have already been published in an
abbreviated form. Some idea of the debt which I owe to modern authors
may be gathered from the references in the footnotes. As I have often,
for the sake of brevity, cited the works of these authors by shortened
and incomplete titles, I have thought it advisable to add to the volume
a list of the full titles of the works referred to. But the list makes
no pretence to be a full bibliography of the period of history with
which this volume deals. The map of the Wäd Mellag and its surrounding
territory, which I have inserted to illustrate the probable site of the
battle of the Muthul, is taken from the map of the "Medjerda supérieure"
which appears in M. Salomon Reinach's _Atlas de la Province Romaine
d'Afrique_.